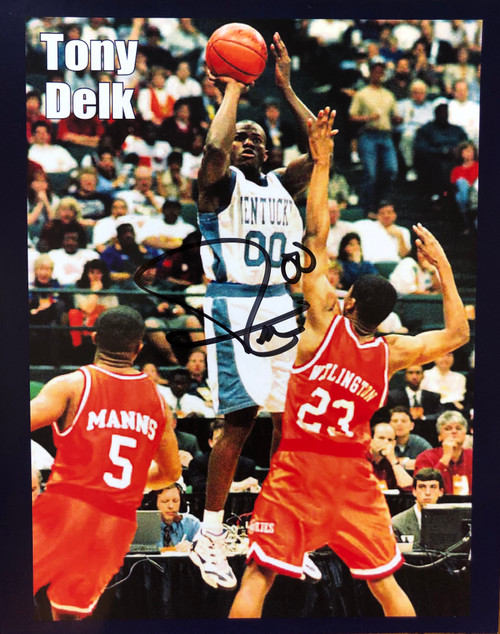 Tony came to UK from Brownsville, Tn as a McDonalds All-American, Parade All-American, Gatorade State Player of the Year, and Tennessee Mr Basketball.  He played for UK from 1993-1996.  In the 1993-94 season he made the All-SEC team and the All-SEC Tournament team.  In 1994-95 he made the All-NCAA Regional Team and All-SEC.  In his 1995-96 season he would lead the Wildcats to a NCAA National Championship while also being an All-American, NCAA Final Four Most Outstanding Player, the NCAA Regional Most Outstanding Player, SEC Player of the Year, and All-SEC.  His #00 retired jersey hangs in the rafters at Rupp Arena and he ended up as the fifth leading scorer in UK history.  He was drafted #16 in the first round of the 1996 NBA draft by the Charlotte Hornets.

All player or coach signed items come with a Certificate of Authenticity from our gallery.  We are known as the best place to get signed items from former University of Kentucky athletes and to meet them in person before the games at Rupp Arena.  We also have private signings with players that play in the pro leagues and offer those items for sale too!  GO CATS!!!