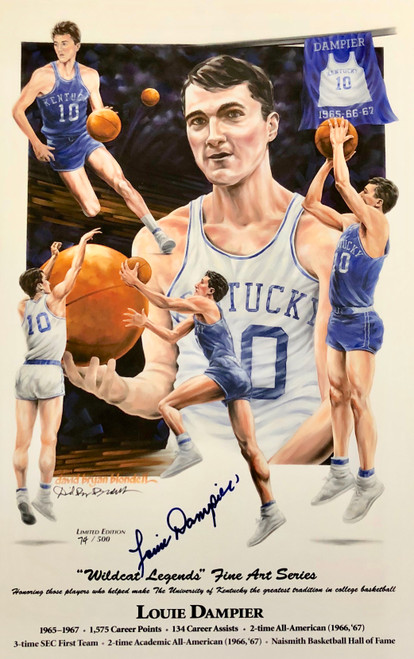 LOUIE DAMPIER came to Kentucky from Indianapolis, Indiana and played from 1965-67.  Louie did not play his freshmen year as they  were not allowed to play at that time.  During his career at UK, he scored 1575 points and handed out 134 assists in three seasons.  He was a 2 time All-American (1966,67), 3 time SEC First Team, and two time Academic All-American (66,67).  He ended his career as the third leading scorer in UK history at that time.  Dampier was a member of Rupp's Runts and helped lead his team to the finals of the 1966 NCAA Tournament, where UK was the runner-up.  While at UK he was a two sport athlete playing baseball also.

Louie played professional basketball in the ABA with the Kentucky Colonels from 1967-1976.  Louie was a three-point specialist with the team and made 500 within a 3 year stretch.  He finished his ABA career with a record 794 three pointers.  At one time he hit 57 consecutive free throws.  He was named an ABA All-Star seven times and played with anther UK great, Dan Issel, on the 1975 ABA Championship team.  After retiring from playing basketball he was an assistant coach with the Denver Nuggets under head Coach Dan Issel.

Louie was inducted in the Naismith Basketball Hall of Fame in September 2015 along side UK Coach John Calipari.

The print release signing will be at our gallery on December 14, 2019 before the Georgia Tech game from 3:00-4:30pm.  Louie Dampier and Dan Issel will be present for an autograph signing at this time. Print size is 10 /34 x 17.