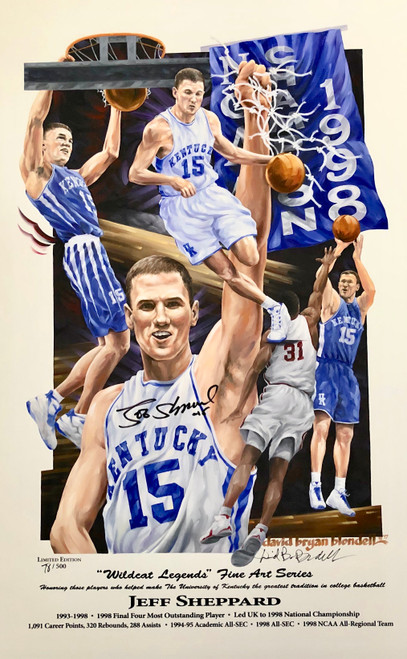 Most Wildcat fans can remember the excitement brought to the Big Blue Nation with the 1996 & 1998 NCAA National Championships.  This was when the Wildcat Nation was brought back to the forefront of mens basketball dominance.  A huge contributor to that run was Jeff Sheppard, the Most Outstanding Player on the 1998 Championship team.  This tribute piece honors Sheppard during that glorious run and was painted by "Wildcat Legend" artist David Blondell.  This is the 8th painting in the series that honors UK legends such as Dan Issel, Joe B. Hall, Tony Delk, Mike Pratt, Kevin Grevey, Jack "Goose" Givens, and Kenny "Sky" Walker.  This is your chance to own a piece of that history and all the glory that time period brought to the BBN.