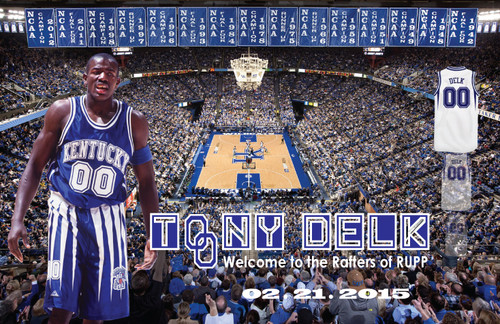 This official poster for the Tony Delk jersey retirement features Tony in the signature denim uniform worn by the 1996 National Championship team.  Rupp Arena is filled to capacity with the Big Blue Nation in the background cheering on their Wildcats.  All the legendary championship banners are shown in the Rafters along with the other previously retired jerseys of University of Kentucky greats.  Tony's 00 Jersey is shown on the right, rising up into the rafters, to it's rightful place in the hallowed rafters of Rupp Arena.

Tony Delk holds the all time record for threes in the history of Kentucky Mens Basketball.  No true blue fan can ever forget all the threes Tony scored throughout his career at UK and the ultimate game against Syracuse in the finals of the 1996 Championship game where Tony carried the team with his three point shooting and was named the MVP of the tournament.

Poster is 11x17 and handsigned by Tony.  A must have collectible for the ultimate UK fanatic!